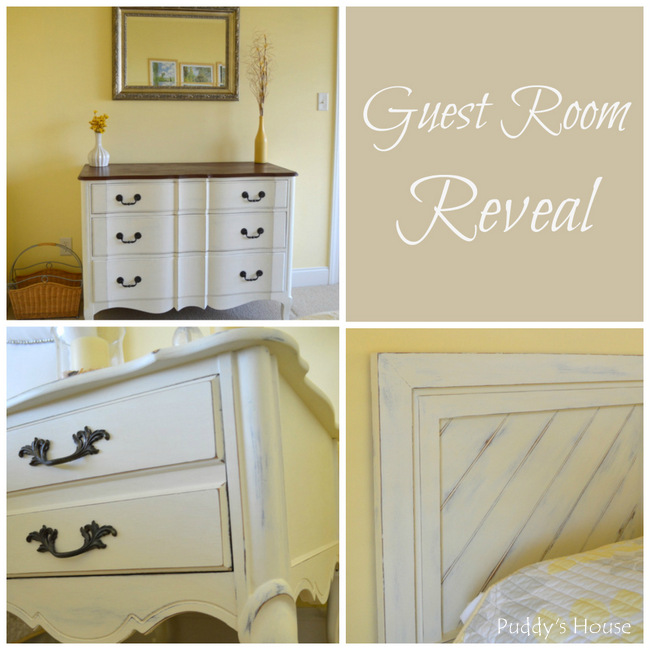 It’s a bit strange and funny to me that I’m writing a guest room reveal for a house I no longer live in!  But, that’s my reality.  I only managed to barely get the guest room done in time for Bob to take the pictures of our house for the real estate listing.  And, then it sold in 5 days, and we quickly transitioned to packing everything up and preparing to move.  So, I feel like I never really got to enjoy the pretty “new” guest room.

The guest room update started when I sold all the furniture out of it!!  That’s one way to attempt to light a fire under me, considering I had a dresser sitting in the garage for nearly a year to redo for the room.  And, surprisingly it wasn’t the first piece of furniture to get an update.  I bought nightstands and gave them a new look first. 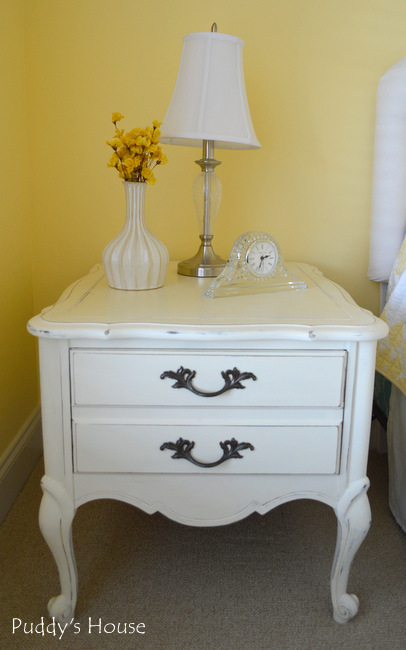 Then, I tackled the Craigslist dresser.  I had procrastinated on it, because I wanted to strip the top and stain it, and that is my least favorite thing to do.  But, it was oh so worth it after it was done.  I think this is actually one of the pictures that Bob used in our listing. 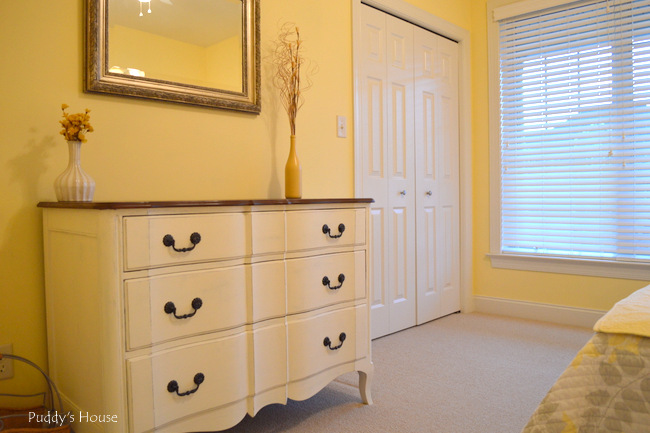 Because when I posted about the dresser, it didn’t have a mirror above it or anything on the dresser.  I found the mirror on a buy/sell group on Facebook and for $40 it was a steal.  It is a very heavy and beautiful mirror.  I know it is still sparse, but again this was the “staged” for selling look. 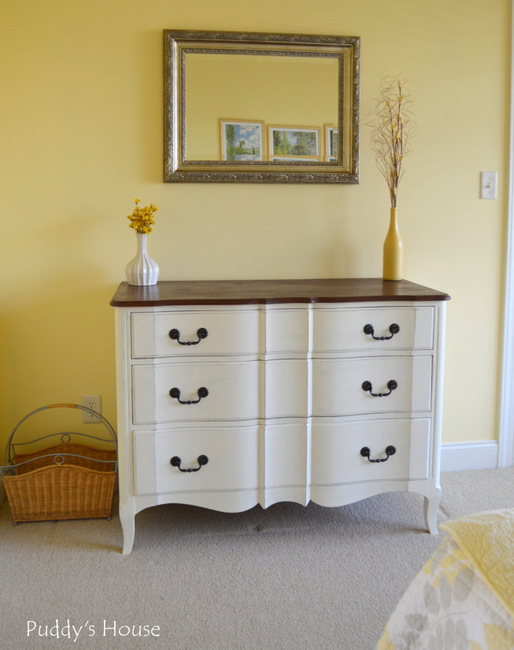 The final piece was the headboard.  I had this headboard stashed in my work area for nearly a year, because I remembered buying it at a yard sale last summer for $10.

Yeah, its not very pretty!  I originally intended to put fabric over the two main rectangle areas, but Bob overruled me on that one.  So, it turned into just a regular painting project to update the headboard.  I used Annie Sloan Chalk Paint in Paris Grey for the base coat and Old White on top.  It was the same method as painting the nightstands, so I didn’t detail the steps in photos.  I just am revealing that I am one of those people that paints from the can and am quite messy when I do it!! 🙂 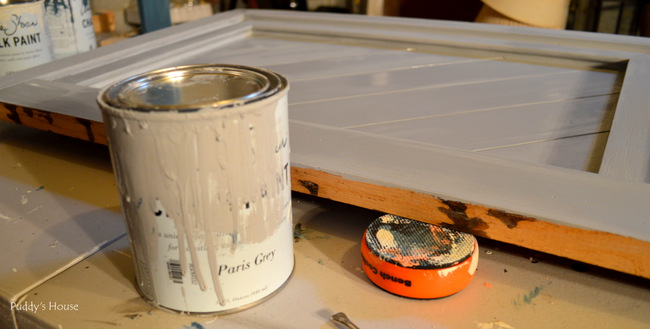 After the painting was done, I took the headboard outside and sanded to smooth and distress it, and then cleaned it up and waxed and buffed until it was nice and pretty. 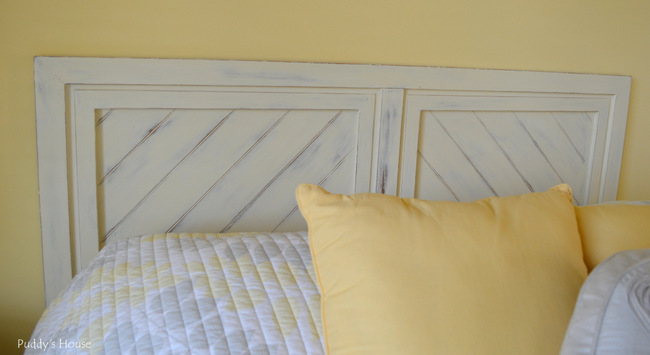 I really do love how it turned out.  I thought the diagonal slats were so dated in the original, but it really gave it a lot of dimension after it was painted. 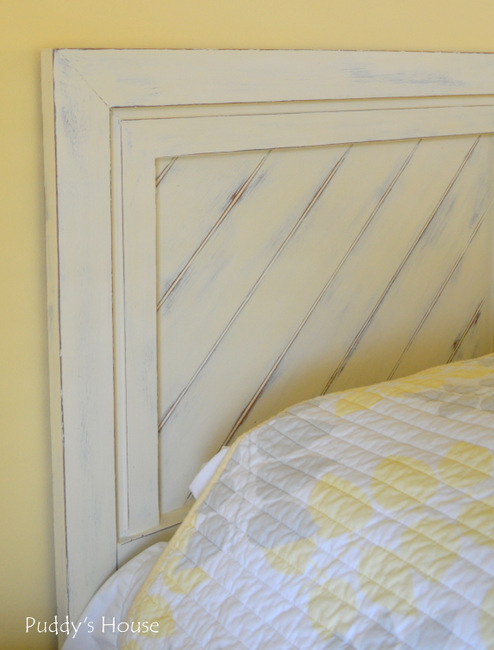 It’s quite a difference from the before. 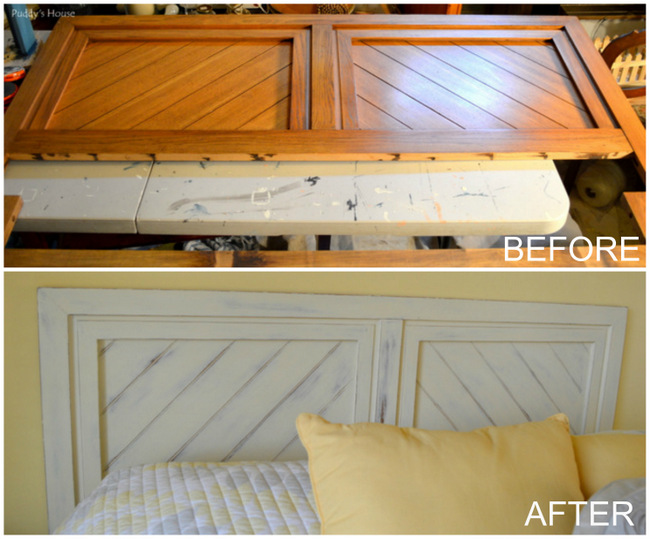 I love how the room came together.  It was a slow process, but I was determined to buy used furniture and make it all work. 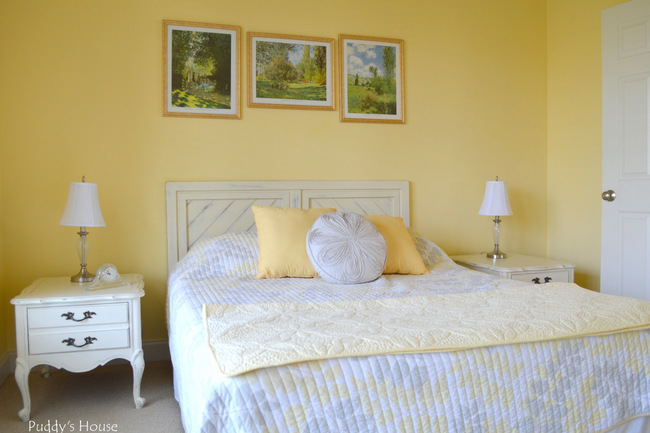 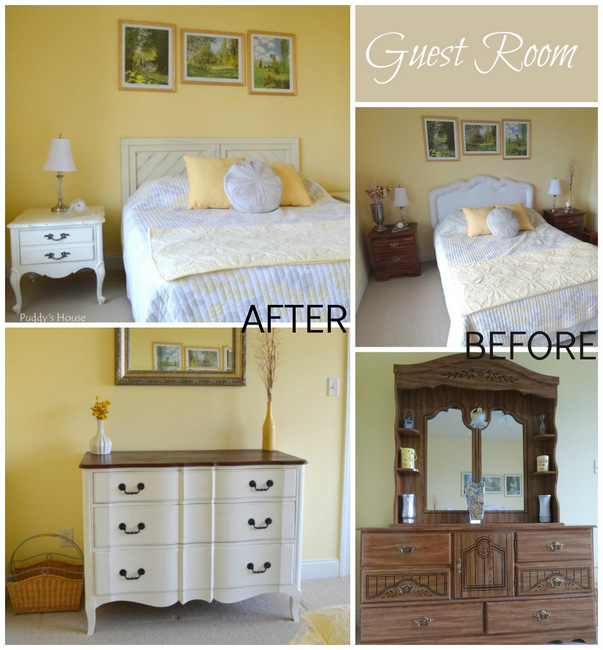 Definitely much more current and brighter!  I can’t wait to pull all my “new” furniture out of storage and have a pretty guest room in our new home later this year.