{This post is sponsored by Chalk Paint® Decorative Paint by Annie Sloan.  Although I wasn’t compensated for this post, I did receive free products in exchange for a review. As always, all opinions are my own.}

I found a pair of these nightstands at the Salvation Army months ago.  I lucked into it being half price furniture day.  I’m pretty sure that I just popped into Salvation Army on my lunch break from work and left with these 2 beauties.  I can’t remember if they were originally $30 each, or if they were $15 each, because the only number in my head is the original $30 and that I paid $15 and I can’t remember if that was for one or both.  I’m pretty cheap so I think it was for both! 🙂 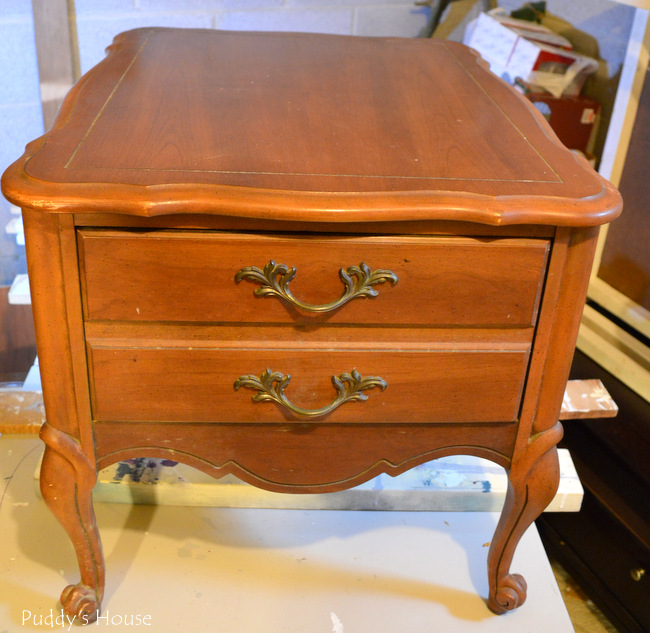 Anyhow, I knew when I bought them that they were getting a makeover because I wanted these for our guest room.  This is what our guest room looked liked: 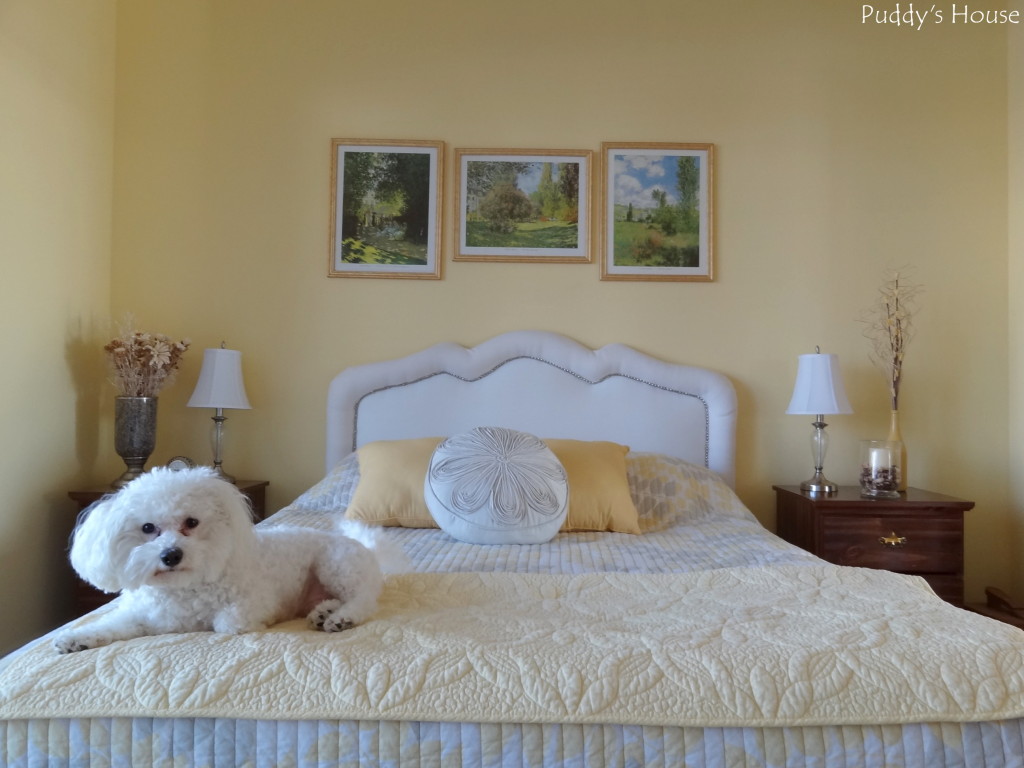 I sold the old bedroom set on Craigslist recently, so the nightstands and dresser (not pictured) are gone.  I wanted the new nightstands to coordinate with the bedding, so I decided to use Paris Grey and Old White Chalk Paint®.  I put on one coat of Paris Grey and two coats of Old White on top.  I don’t have in process pictures because I painted in the basement and the lighting is terrible!  Thankfully, I just got new work lights from my husband for my birthday, so I will hopefully be able to have in process pictures of upcoming projects.  After I was done painting, I took the nightstands outside to lightly sand and distress them. 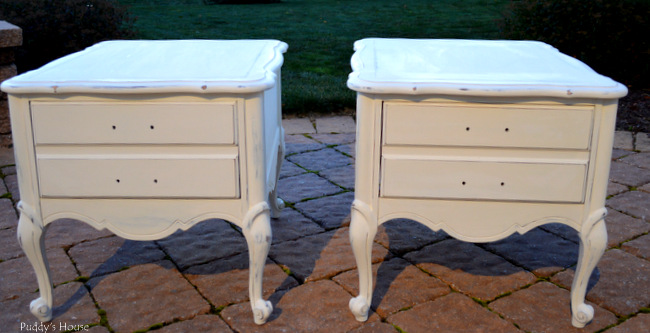 Even sanding was challenging at this time of year….it was before 7am outside in 18 degree weather.  It was cold!  But, I got them sanded and then brought the nightstands back inside to put on a coat of wax. For the wax, I used Annie Sloan Soft Wax in Clear and the Wax Brush. 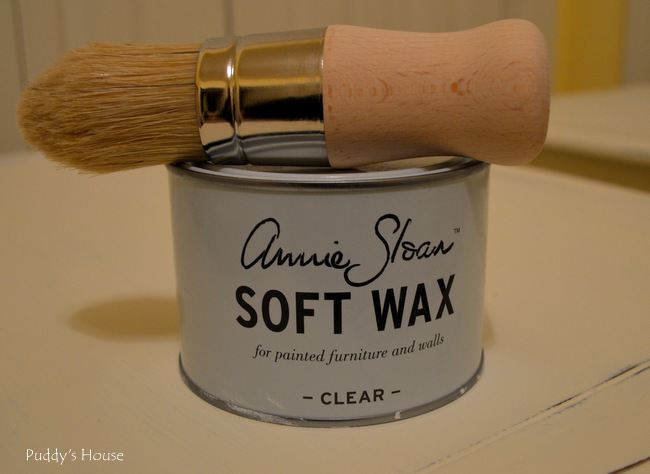 This was my first time using the Wax Brush and I really liked it, especially with all the crevices on the nightstands, it was very easy to coat.  After applying the wax, I used a cloth to buff the wax.  The wax always makes the details shine  so nicely, and it is a great protective top coat on the paint. 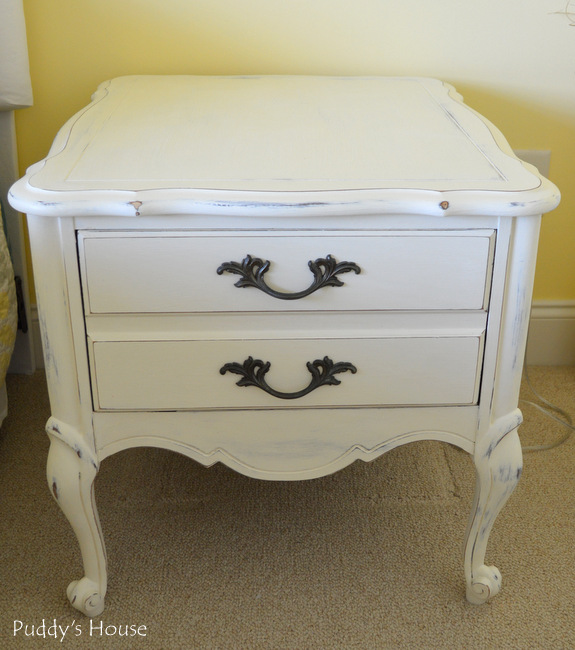 I put the original hard ware back on the nightstands.  I originally wanted to paint them brushed nickel, but with the current temperatures I can’t spray paint like I would want to, so I just left them as-is.  It actually doesn’t bother me to have them dark, but I still might change them later. 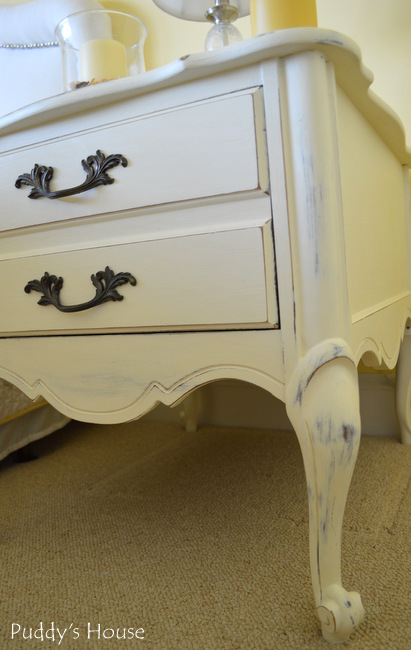 I distressed the nightstands so that you can see some of the Paris Grey and also some natural wood in certain places. 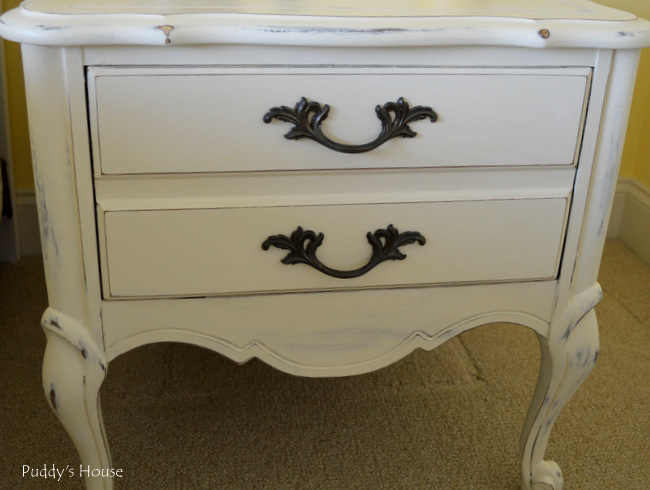 The timing and conditions of this project has been interesting: bad lighting in the basement while painting, bitter cold outside early morning sanding, followed by early morning waxing, and then complete with a quick lunchtime stop at home during my work day to be able to take daylight after pictures.  So, needless to say, there was not a ton of styling happening.  I merely pulled out some of the items from the old nightstands and put them on the new ones.  Since the shape is so different, the décor is not ideal, but it works for now. 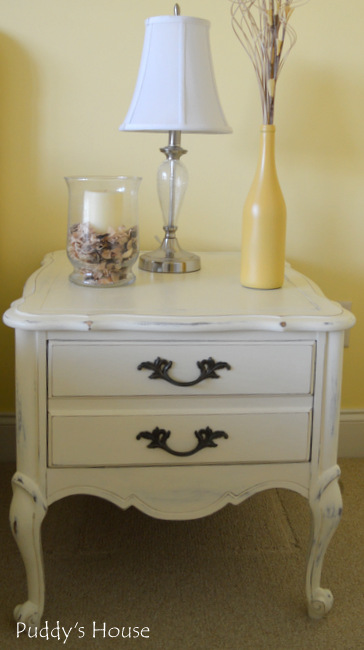 These nightstands definitely changed the look of the guest room.  I think it really brightened it up. 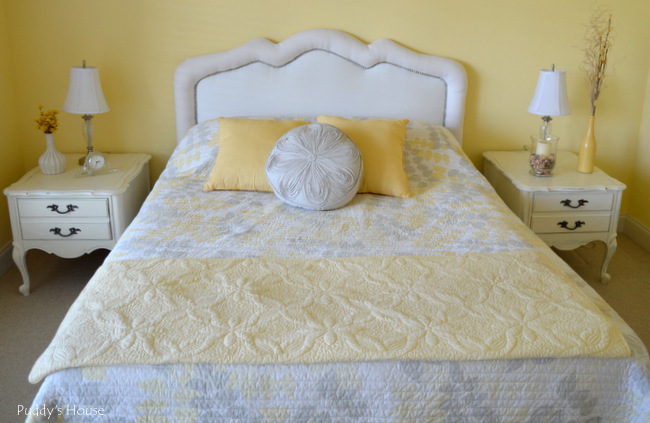 Just a quick reminder of the before and after. 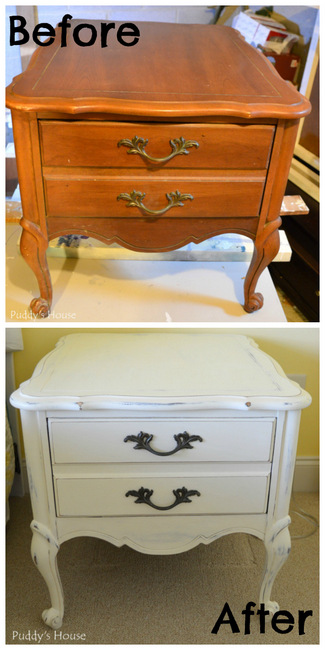 Next up is the dresser for the guest room.  I’ve literally had it about a year, and have only recently started to work on it.  For the dresser, it was already painted so I had the crazy idea to strip the top. It is now ready to be stained, so hopefully I’ll be able to share soon.

Have you updated anything with Chalk Paint® ?